Take a couple of Swingers, hand them microphones, slip them into tuxedos and what do you have? The Swinging Martinis

With a double scoop of comedy, a generous serving of musical mayhem and some good old slapstick, The Swingin’ Martinis have put together a cocktail that every self respecting Swinger will not want to miss out on.

Johnny and Vinny have worked together in various guises for nearly 20 years and it shows!

They share the same dress sense (nothing less than a tuxedo), the same love of good music and of course the same sense of humour that has entertained many audiences from Brisbane to Sydney to New Zealand to Cairns to Fiji to Hong Kong and back again!

The Swinging Martinis have performed for many major clients including: Mercedes, K.P.M.G, Caltex, QANTAS, A.M.P and Toyota to name a few, and recently had the opportunity to perform at the Queensland Parliamentary Ball before a distinguished audience that included Sir Richard Branson, and Queensland Premier Peter Beattie amongst others

With a show that is high energy, musically entertaining, interactive and a whole lot of fun, many clients have felt the urge to say:
“Dean and Jerry live again”!

Although the boys work with pre-recorded backing music for their 40-minute show, they can extend the line-up to include ‘Live’ musicians for a bold, brassy, more dynamic sound.

With all the up-tempo hits from such artists as Frank Sinatra, Dean Martin and Tom Jones, a Swinging Martinis show is highly energetic, interactive and a whole lot of fun!

So go on, if you’re looking to give your function or corporate event that extra ‘Swing’ there is really only one choice, Ladies and Gentlemen. The Swingin’ Martinis. 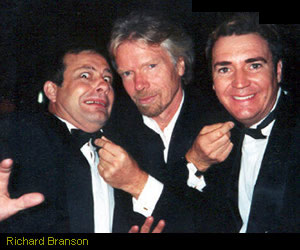 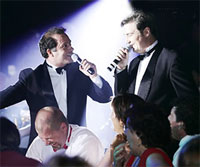 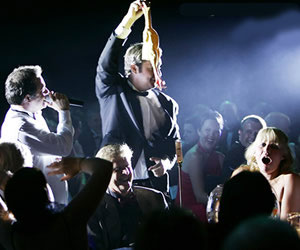 Play Video
"Very funny and terrific voices"
Mercedes Benz
"Your show really made the night"
Microsoft
"That was great. Well done boys"
Richard Branson
"You guys were great. It was a shame to see you leave the stage."
Toshiba USA
"The Swinging Martinis were exceptional. They worked the crowd extremely well, were interactive, fantastic voices and their performance was enjoyed by all."
Young Presidents Club, QLD
Facebook-square Instagram Youtube Twitter Vimeo